The subject of today’s vlog is location. Defining the project that I am working on to produce the film ‘Senghenydd’, I am vlogging my experience to act as feedback and a reminder when I come to write my dissertation of the different steps and experiences therein.

The next issues was to look at locations. Most of the movie is set in mine tunnels, but there is also the beginning of the piece and a postscript, set in the memorial gardens in Senghenydd. I have been driving around, looking for venues to film at – or to film backdrops for imposing on green screen. Here are some images to show the locations found. 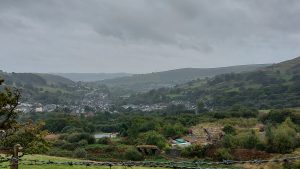 This is Senghenydd, looking from the valley end. I discovered this, as the Satnav took me into the Aber valley over the top end and moorland. A great place to stop and run some film. 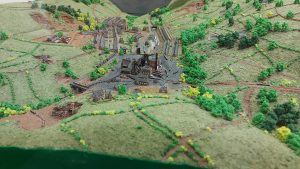 There’s a model of the valley in the local ,useu,. circa 1913, I could use this shot to blend the modern image into this historic set up, to take the viewer back in time (with suitable titles) 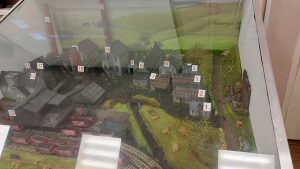 There is another model of the pit as it was (demolished since , in 1962) 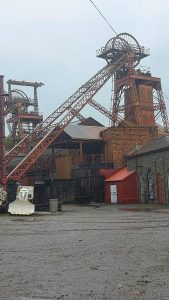 Very similar to the two wheels at the old Lewis Merthyr pit – now the Rhondda Heritage Park. So, I can fade from each of these images to take the viewer back from today to 1913 Senghenydd and the day of the blast that killed 439 people. 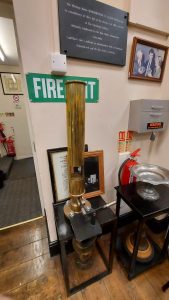 This is the klaxon that was sounded. Perhaps a green screen background might allow me to use footage of it.

There may be opportunity to film underground, as although it is difficult to do at Big Pit (due to h&s regulations regarding items capable of causing sparks underground in a setting that can have the potential of a flammable atmosphere.) However, Rhondda has low lying tunnels that give you the impression of being deep underground. Rhondda has agreed for me in principle to film there in January. The small window of opportunity is exceptionally kind and I am really grateful, but may not be enough. We may therefore have to recourse to a green screen on the campus stage. On the face of it, it may make the logistics of moving a team of people and equipment back and forth – and could also allow effects, such as smoke to be included. I will need to make images like the following: 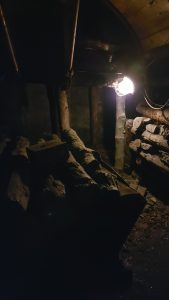 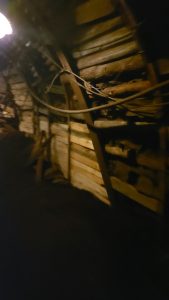 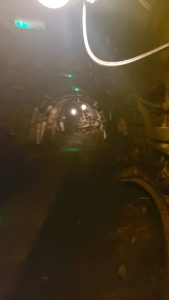 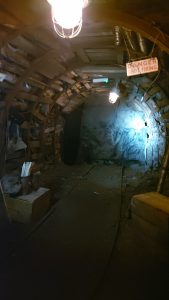 The cage scene may be awkward to get filming in. However, I could possibly instead have the image of the wheel turning and a voice over, to imply the journey. The only moving wheel is at Big Pit. There are also some other views I could use at Big Pit at the end, that are so typical of the Welsh valley – a pithead with terraces in the background. The welsh flag. See below: 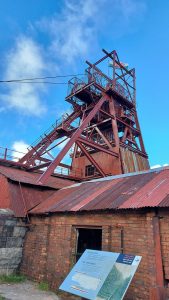 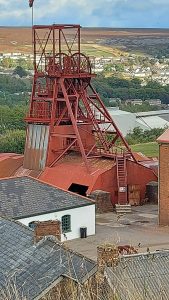 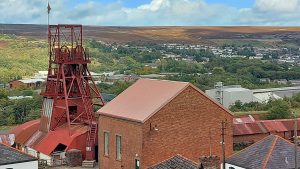 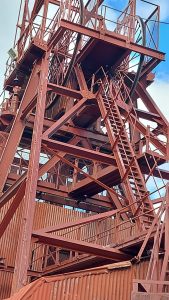 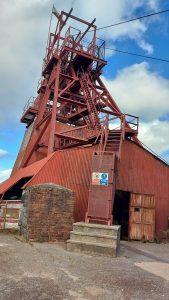 The flag would not be flown at the time, but would be great to include in final shots. Big Pit have kindly allowed me to film outside the mine buildings.

The final scene is a narration of what happened afterwards and the poignancy of the fines being the equivalent of £14 per head in today’s money. I aim to film these in the memorial park on the site of the Senghenydd colliery 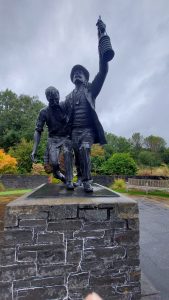 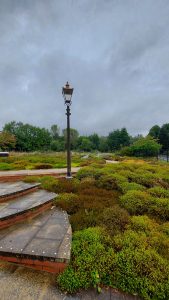 I initially thought of filming this as a selfie – to make it more personal. However, doing that would make it difficult to control. I am therefore hoping to recruit volunteers to camera, lights and sound. I had thought I would have to act the role, but am hoping I can get an actor to do so. that would allow me the space to direct and produce the film by standing back and looking on , controlling the output etc

So much to think about!!