Kautla is a forest. Kautla is a lake. Kautla is also a land of great serenity and great pain. I had asked to visit this place, lying south of Tallinn and just off the road to Tartu. It is part of Kõrvemaa and one of many places that combines large farming fields with dense forests.

It was a glorious Saturday, sunny and warm with a gentle breeze when we set off down the road as Estonia continues to upgrade its infrastructure. Soon the modern dual carriageway gave way to massive roadworks. The dual  to single lane and we were back on the old road, ravaged by the years of freezing and thawing. Estonia has a temperature difference of around 50 degrees between summer and winter, so you can forgive the occasional pothole.

At the town of Ardu, (a place where afficionados of Scottish liquor would cry out for a distillery to be born there,) we turned off and began the long trek down a gravel track to our destination.  I was looking for the memorial to an event in 1941. It was a place of triumph and tragedy, where the name Erna was carved into history. I wanted to see what it looked like and how it felt.

Erna was a hand-picked reconnaisance group from Estonian volunteers in the Finnish Army. They were formed to feed back information of the Soviet occupation to the Finns and the advancing German Army. Around 60 men were sent by boat or air and they set up camp in the forests near Kautla farm. Some had already made their mark at Ardu, ambushing a convoy taking a Soviet judge to the trial of people arrested for non-soviet behaviour. The convoy was destroyed, the trial shelved. I hope the accused survived, because justice at that time was shocking. On 14/6/41, only a month previously, 10,000 people were forcibly deported to Siberia overnight. Mostly women and children at that and precious few returned. It was the beginning of what is known as the Red Terror.

As news grew of the arrival of Erna, Forest Brothers and refugees flocked to Kõrvemaa. There are reports of the Estonian flag being flown at many houses as people suddenly found hope of release from the nightmare. I wonder if they found peace from the feeling of the area, as I found it that day?

We first passed the reservoir for Tallinn. It is large and calm. Forested islands form a stunning view. Dragon and damsel flies flit about in the reeds and the place is tranquil. We discover wild raspberries – always a treat in this land, and drive on down the gravel road. It’s a fairly good surface, there are occasional potholes that we need to drive carefully over, but it’s hardly enough to worry about. 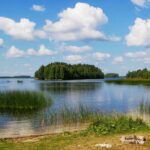 After a while the forest peels away a bit and there is a view of Kautla lake through the trees. We park close to the marshy shore and go to look at the peaty waters. The absence of human activity is a blessing, coming from noisy, bustling Tallinn as we had done that morning. The only signs of human activity were that some yobs who have left their camp fire festooned with the tinnies of a beery night. Ignorance knows no boundaries. 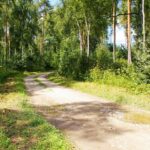 We drive on and pass a ruined building at the roadside, overgrown by trees, Then the forest falls away to a clearing. The grass is ankle deep. There appears to be the base walls of buildings, hidden in the trees to the right. The area is naturally beautiful.

‘This is Kautla,’ my friend said. 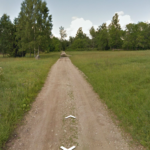 An old milepost is slowly being consumed by an anthill. We walk past it to a glade, where there are a lot of standing stones. The Kautla Memoriaal. 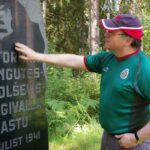 By all accounts in 1941, the area became a haven for refugees and forest brothers hoping for a new future for Estonia, flocking to the Erna camp. 1500-2000 people were in the forest, of which only 200 bore any arms to fight with. Their weaponry was mostly old and supplies were scarce. The German Reich had chosen not to arm these men, for fear of Estonia recovering its identity and independence, as Ukraine had done. They would have been right, and it would have cost Hitler his dream of a Greater Germany – at least for the short term.

The Soviet forces were aware of a growing presence and on 31st July, Erna became aware of an 1100 – strong Soviet force trying to encircle the enclave and destroy the camp. It beggars belief for me, that with a rampant German army breathing down their necks, the Soviets would pour such resource into this mission, but Stalin had ordered a scorched earth policy of retreat and he was a difficult man to argue with and stay alive afterwards. And perhaps they too wanted to ensure Estonia would not rise again.

Erna got wind of the convoy of troops arriving and all who could defend were sent out to meet the enemy head-on. They ran the few kilometres and managed to stop the convoy, at great cost to the enemy. They then successfully fought off the Soviets and moved back to the German lines, protecting their refugees as they went. It took four days and numerous skirmishes. There was a huge cost to the Soviet machine for this spiteful chase, and all for naught. They failed to destroy Erna and its charges.

In the glade today are various monuments to the civilians and soldiers killed in the conflict. The largest stone is to the Erna groups. Nearby are the original memorial headstones, probably made after Germany had overrun the Soviet army and then  smashed to pieces after the Soviet return. now they have been painstakingly put back together and to me form the most poignant testament to the will of the people.

We look over the ruins. This is fertile land, wild flowers of various colours grow happily in freedom all around. There are gooseberry bushes still growing next to the ruins of the house. Lingonberries also. These were farm buildings and perhaps knowing the tale, I feel a more sombre atmosphere here. especially when i am shown the granite headstone marking the grave of Johannes Lindemann 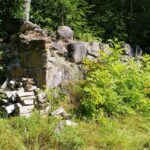 Many escaped with Erna, but many remained with their farms. On their lands, their livelihood. If you’re a farmer, you ARE the land and it is part of you. In the Great war, there were reports of Belgian farmers carrying on with their work when they could whilst the nightmare of the Western Front went on around them. It’s what you do, carry on.

The Soviet forces, unable to catch the Erna group, wreaked its revenge on the incumbent population. The Soviets had already formed ‘Destruction Batallions’ from criminals, and fanatics. They were given a simple brief; cause destruction. Kill on the spot anyone they deemed to be acting in an anti-soviet way. A licence to do what they wanted when they wanted. Power corrupts, absolute power corrupts, absolutely. They tore through the Kautla area and murdered many of those who remained.

Lindemann was a farmer at Kautla. His family and workers were burnt alive by being thrown into a trench and set on fire.

‘They were Latvian Reds’, I am told.  The Soviet secret to immunity from conscience seems to be to put strangers into the field . They had little sympathy for people of another land. I mention this fact to show the dissociation.  But no country has a monopoly in inhumanity, there are bastards everywhere. Ask the people of Cork what the British force known as the Black and Tans did to them during the Irish war of independence, still just within living memory. As a Brit, I know there is no moral high ground that any land can hold unblemished . As a human, I know that some people have no boundaries to blackening the name of their species. Besides, you always should judge people by the best of them, not the worst. I am lucky in that every Latvian I have met to date have been good folk.  Kautla felt sad, decaying flowers at the headstones, a large white cross stands in the bushes  The calm land gives out a great sorrow.

What of the fugitives in 1941? Many escaped back to the forests where they had come from, to live as Forest brothers. Sad, I am sure, that the dream had ended for now. Some of the partisans stayed to form a new Erna. They fought on Saaremaa and Hiiumaa. They helped save 2700 people on the Eestirand – a ship full of conscripted Estonian soldiers escaping besieged Tallinn, bound for Russia. The captain refused to comply with his Soviet superior and although damaged by German bombers, the ship, proudly bearing the Estonian flag, beached at Prangli island saving his compatriots from becoming Soviet cannon fodder.

Erna became a unit in the German Army. It makes a few Russian politicians label Erna as fascists. The Germans tended to form foreign units  as SS divisions. What accounts I have found from people who fought in Erna tells me they were young men wanting to free their country from being part of an empire. Some of the Erna did not stay. They had sworn allegiance to Finland, not Hitler. They crossed the Gulf  to become ‘Finnish Boys’ once again, rather than become part of the new occupiers.

The ruined buildings and the standing stones are all that is left of those turbulent times now. The Estonians would have to wait to the collapse of the Soviet Union before they could proudly call their land their own once more. Then it was a different history. Arms were linked in a human chain all the way to Lithuania. Voices were joined in song. The spirit did not die in 1941, it still lives on.